Especially this year, when so many of our South Carolina Gamecocks are looking so good!

I think we all know who’s going first:

That’s right!  Our very own: Clowney!!

In case you’ve had your head buried under a rock for the last couple years, here’s a reminder of who Clowney is, exactly:

And then, of course, we have Bruce, Kelcy, and Connor who I’m hopeful will go tonight or tomorrow, as well.  They’ve all worked hard, and they’ve given us some awesome football to watch.

Let me tell you – there’s no better place to watch these guys play than at Williams-Brice.  But I’ll happily root for whichever pro team they’re picked to play for.

So do me a favor tonight – Help support and and cheer these guys on as they make football history! 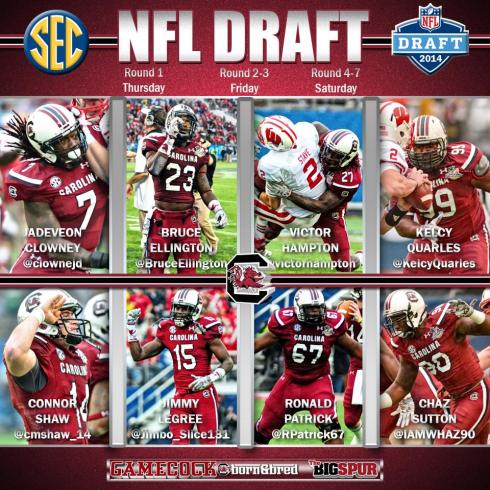 Ode to the Cocks

Clemson…
Who?
Oh Cocks, my Cocks. 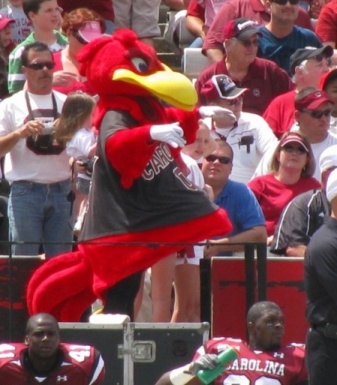 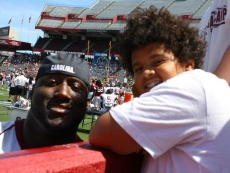 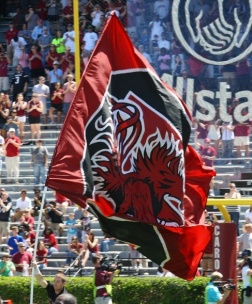 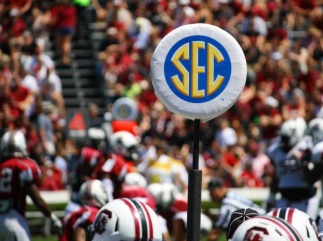 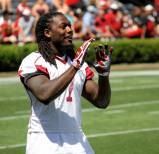 Masterpiece. No matter where you are (and where you’ve been), I’m certain you’ve stumbled upon something extraordinary: a place that blows your mind; a work of art or object that speaks to you; or even a location or scene that’s special, unusual, or even magical in some way.

When I read this and thought about it for a few minutes, I realized that I didn’t have to look to some foreign work of architecture to find beauty, but rather, needed only to look in my own back yard.  Our South Carolina State House, in Columbia, is a beautiful masterpiece.  Built in 1854 and completed in 1903, it was eventually designated a National Historic Landmark.  Today, it adorns six bronze stars, representing the places where it was hit with shells from General Sherman’s cannons during the Civil War. 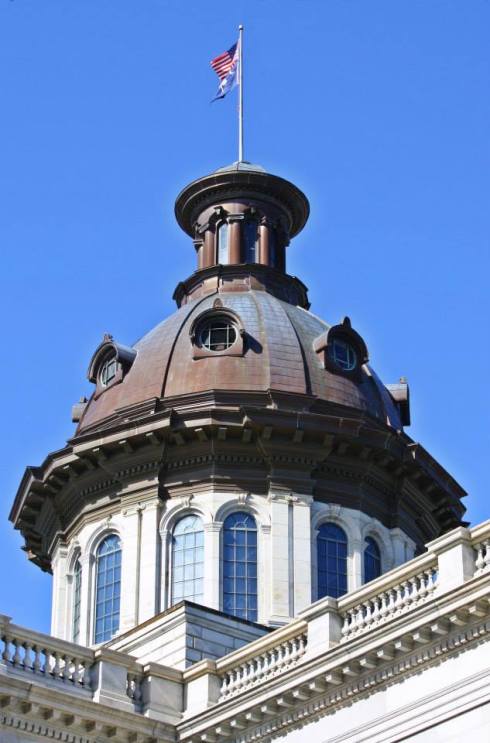 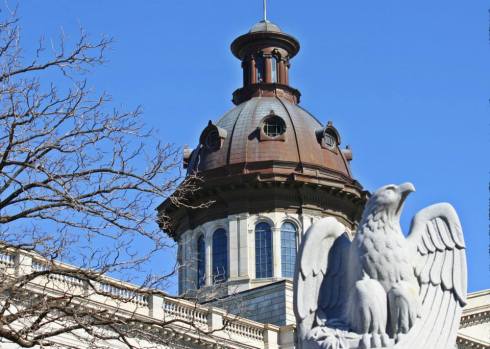 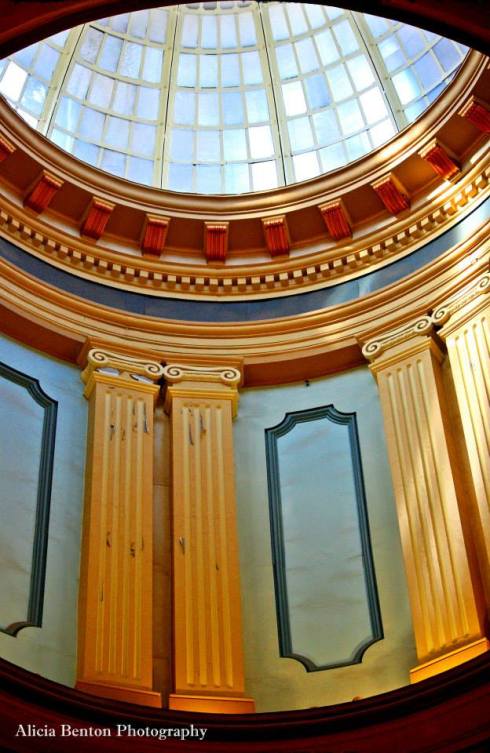 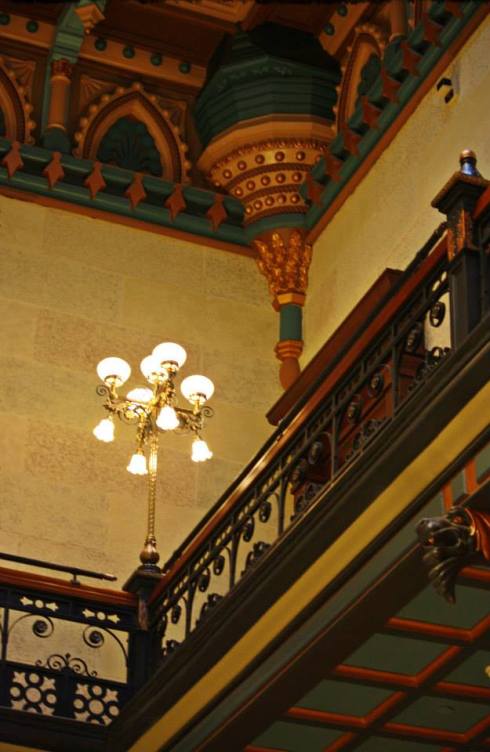 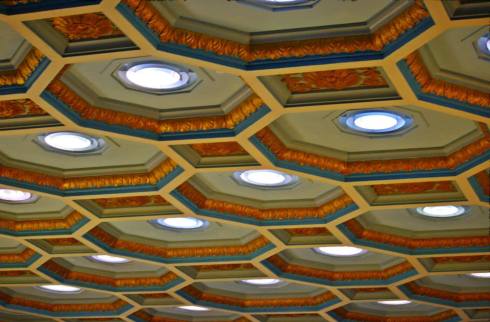 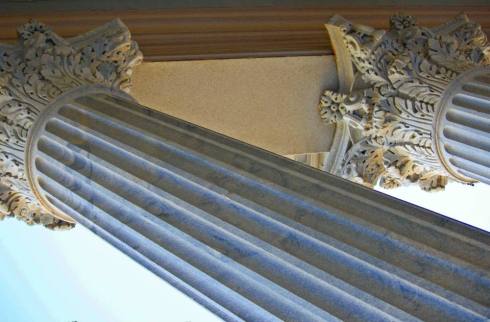 “You can’t make decisions based on fear and the possibility of what might happen.” ~Michelle Obama

Unfortunately, I’ve made several of the latter in my 31 long years of life so far.  Maybe not necessarily ones I’ll regret forever, but ones that I’ll spend the rest of my life at least wondering about and questioning. 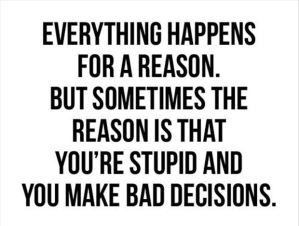 I’ll bore you to death and share with you some of those decisions that I still wonder about.  This is probably more than you’ll ever want to know about me, by the way, but I don’t care… It’ll make me feel better to make you listen to me.  Remember, free therapy and all…? 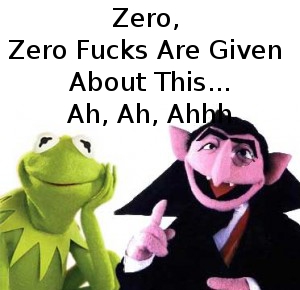 Source: Your Face is Stupid!

1. I got accepted to NYU but went to Charleston Southern instead.  Whaaaat???!  I know, I know.  But they didn’t have a Criminal Justice major.  And I didn’t want to major in Gender and Sexuality Studies or Jewish History and Civilization.  Bummer.

Anyway, now I always wonder about how cool living in NYC would be during college.  I’d probably still live there and work at some kick-ass law firm.  Oh wait.  I do work at a kick-ass law firm.  But not in the middle of NYC, so that doesn’t really count.

Oh, I forgot to mention – it probably didn’t help that I was pregnant before even starting my Freshman year.  THAT would’ve been fun.  Living in NYC by myself, going to college, going to the best parties, being knocked up.  Yep.  Sounds like a blast.

Wait, wait, wait.  Before you judge me [some more], let me explain.  (And move on to decision number two.)

2. I married my baby’s daddy.  Yes, I really just used the term “baby daddy” and promise to never ever use it again.  Shame on me…

This, folks, was a BIIIIG mistake.  While I don’t run around condoning unwed pregnancies, let me be the first to say that getting married is NOT the answer.  It actually makes things worse.  (You can’t just up and run from the bastard.) 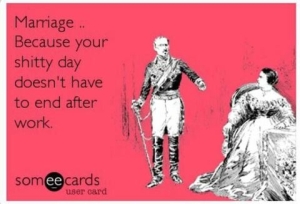 I got married when I was 19.  That is much much too young.  I should’ve listened when the entire planet told me that.  But noooo, I was 19, and I knew everything!  Sound familiar?  If not, just wait until your kids turn 19.  Then you’ll know exactly what I’m talking about.

Even after getting married, I will still virtually a single mom, so I would’ve been just fine on my own with a new baby.  I still worked full-time, went to school full-time (and took 18 hours each semester), made the Dean’s List every semester, and was still a damn good mom.  No, it wasn’t easy, but I did it.  And well, I might add.

The entire time I was struggling to get by for Gerald and me, the bastard husband was physically and emotionally abusive and ran around constantly with one whore after another.  (But that’s a post for a different day…) 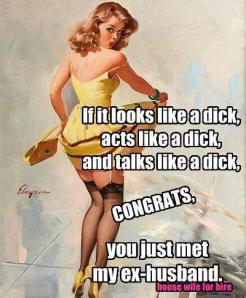 I wonder pretty often about how much different those nine years would’ve been with just Gerald and me.  And possibly an actual nice guy to join us.  Damn, why did I have to be so stupid???

3. Obviously, because I had a kid at such a young age and another when I was 20, I had to put my law school plans on hold.  The original plans were that I would start law school immediately after graduating from undergrad.

That would’ve been fine and dandy, except by that point, the boys were playing peewee football.  And man, were they CUTE!!  I couldn’t stand the thought of missing the chance to watch their games, so I put my plans for law school to a screeching halt. 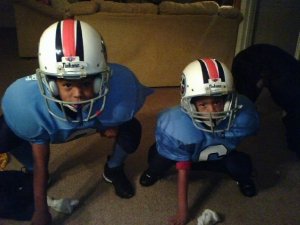 You can see where this is going already, can’t you?  The problem comes in with the fact that they haven’t gotten any less cute or less talented.  Gerald’s now a damn good defensive end and catcher, and Ronald’s a hell of a guard and pitcher.  I can’t stand the thought of missing out on watching where their talent and hard work is going to take them. 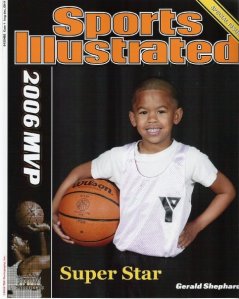 Their practices and games requires a lot of time and dedication, and obviously until they can drive [God, help me], that’s my job.  I refuse to make the boys suffer for my poor judgment, which we’ve discussed many times, if you remember. 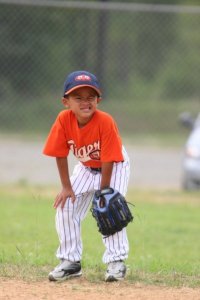 I hope to still go to law school once they’re both in high school, which is terrifyingly right around the corner.  Then, at least, they can drive themselves [yikes!!!] and they’ll have practices right after school.  Not to brag, but I think I can be a pretty damn good attorney, so I definitely don’t want to let the opportunity pass by forever.

4. Since moving to Charleston to go to college, I’ve been convinced that I wouldn’t leave this area.  I love it here, despite the morons who’ve given South Carolina a bad name.

Now mind you, I hated living in Myrtle Beach, better known as the Redneck Riviera.  My family moved there when I was in the 7th grade, and I hated it.  I couldn’t wait to get the hell out of there.  Once I moved to Charleston, though, I had myself convinced that I didn’t hate the whole state. 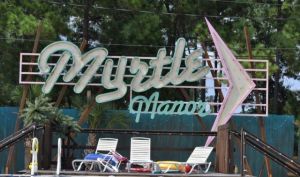 The only problem with living in Charleston since college was that I missed my mom and sister terribly.  They’ve always been amazing at coming to visit, but it’s just not the same as living in the same city.

So, hubby # 2 and I decided it would be a good idea to up and move back to Pawleys Island (in Myrtle Beach) to be closer to my family, especially my granddaddy who was sick with lung cancer.  Two words: BIG. MISTAKE.  As soon as we moved, I remembered every single reason why I hated it there so many years ago.  Traffic.  Tourists.  Dead winters.  Obnoxiously busy summers.  Crappy law firms.  Crappy salaries.  Tourists.  Traffic.  I hated it!

Stress about money, jobs, the step-kids visitation with their mom, and things like that led to one problem after another.  Long story short, hubby # 2 and I separated (ugh – here we go again), and I ended up moving back to Charleston.

I can’t help but wonder if whether I hadn’t moved back to begin with, if things would still be just fine and dandy like they were before I moved.  Fortunately, I got a great job at an amazing firm, after having left an amazing job to move, so that worked out.  I love where I live now, and I love this area, but damn… I didn’t realize that the cost I’d pay to be happy again would be so high. 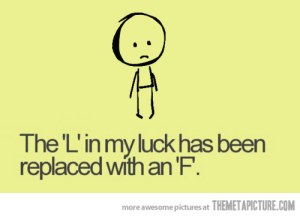 This is only the beginning of my questionable decisions, but they seem to be the ones I think and wonder about the most.  Of course, there’s that one time I went out with some girlfriends and woke up in the hospital, but I don’t think that affected me for the rest of my life, other than to say that I no longer trust bartenders who give me free Purple Hooters all night…

There I go, getting off-track again.

They say hindsight’s 20/20, right?  Well now I know what that means.  If I hadn’t made the debatable decisions I’ve made up to this point in my life, I may be a rich, happily married attorney, who’s not stuck with doing all the work and making none of the money and spending all my time in divorce court.  At least I’ve got Gerald and Ronald, though.  They’re my life.

I guess it’s true what they say: There’s always a light at the end of the tunnel.  My tunnel just seems to be really damn long.

What decisions do you wonder about?  Any that you would go back and change?