“I wish I could bake a cake filled with rainbows and smiles and everyone would eat and be happy.” ~Mean Girls

As I get older, I’ve seen more and more “feminist” posts on the Internets, the Google, and the Facebook.  They encourage us women to support one another and not be so damn mean and judgmental all the time.  Every time I see one of these posts or articles, I stop and think about my real-life experiences.  Are we really that critical and judgmental of each other?  Okay – yes.  The more I answer, “Yes,” the more I wonder why we’re that way.  I can’t help but wonder if we’re actually wired that way – if we have something innately inside of us that causes us to be a little more critical of other women than we are of men (or, heck – even more than men are of other men). 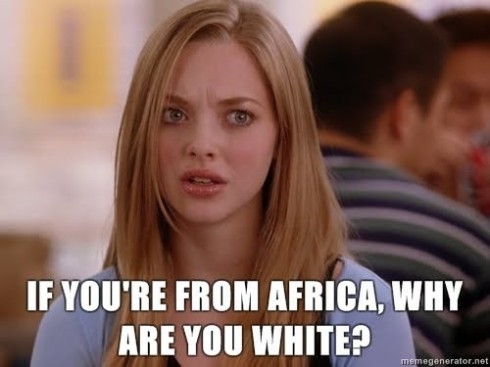 For example, here’s a real-life situation that just happened a few weeks ago.

One of the women here at work recently came back from maternity leave.  She really is one of the sweetest, quietest women I’ve ever met.  You know… she’s one of those genuinely nice people who always smiles and asks how you’re doing.  (Very unlike me…)  Well anyway, like I said, she just came back to work after having her first child – an adorable, chubby-cheeked little girl.

While I was standing at the printer, she walked by me and stopped to say hello.  This was the first time I had seen her since she’d been back to work.  Of course, I excitedly asked her how she and the baby were doing, welcomed her back, and then told her…

“I can’t believe how great you look!  You look amazing!”

Say what?!  Why in the world was that one of the very first things out of my mouth?  The funny thing, though, is that right as I started to internally question myself, another of our female coworkers walked up and said, “Wow, you really do look great!”

What in the world??  Do we automatically assume that someone’s supposed to weigh 400 pounds after having a child?  Thankfully, I’ve never weighed anywhere even close to that, so I certainly know better.

So what made that my automatic first response then?

This is what has me wondering if women, in general, are perhaps biologically wired in such a way as to focus on the more superficial aspects of life, therefore causing us to naturally be more judgmental and critical of other women.

Let’s explore this for a minute.

Women have certain hormones that men don’t have.  And those hormones have a tendency to fluctuate, sometimes dramatically, after several changes in our lives.  Okay, fine… and every month.  Could these hormones play a role in our judginess?  [Yes, I made that word up.  And I like it, darn it.]

Or maybe men are just as judgmental as we women are, but they don’t outwardly express it like we do.  That makes sense to me, too, seeing as men are seemingly naturally quieter than women.  I don’t know, men… you tell me.  What is your first thought after you see a woman who’s just given birth?

Or… perhaps men are just more laid back than women and really could not care less about the things women seem to focus on.  Maybe they just really don’t care if they match or if they look fat in their jeans.

Could women possibly need greater amounts of affirmation?  Maybe we affirm other women because we would want the same compliment if the roles were reversed.  I’m not going to lie – I would feel pretty good if someone told me they could never tell I just had a baby.  On the flip-side of that, though, maybe we put other women down solely in an attempt to boost ourselves up.

Why is it that our self-esteem boosts often come at someone else’s expense?  I would love to have a better understanding of this.  In the meantime, however, I’m going to try to do a better job of controlling my thoughts and words, especially when they may be superficial, judgmental, or downright mean.

If I had it to do over, I wouldn’t have told my coworker how great she looks.

I would have told her what a great mommy she’s going to be.