“It’s easier to dismiss ghosts in the daylight.” ~Patricia Briggs

I think that by now we’ve all noticed the rise in TV shows about ghosts and spirits:  Ghost Hunters, My Ghost Story, Ghost Adventures, Haunted Collector, and my personal favorite, Paranormal Witness.  Also, we’re drawn to movies like Paranormal Activity and The Exorcist.

For some reason, as dumb as I sometimes think these shows and movies are, I still can’t turn them off.  Except at night when I’m home by myself.  Then I change the channel as fast as I can!!  I think the reason I’m so drawn to them is because of something that happened when I was about ten or eleven.

My sister and I used to have our own bedrooms, but they were right next door to each other.  We used to knock on the wall between our rooms and talk to each other at night, until Mom and Dad would fuss at us and tell us to go to sleep.

Anyway, one night I was lying in bed, and I heard something outside my room.  I assumed it was my mom going to the kitchen, but she never actually passed by.  I looked at my door and into the hallway, and I kid you not… there was a man standing in my doorway!  While I couldn’t see his face, I could see his entire silhouette leaning against my doorframe.

This is kind of how it looked: 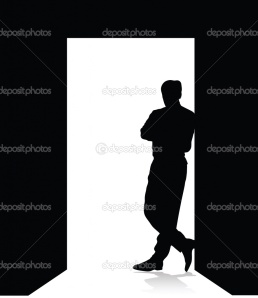 I gasped, buried my head in my pillow, and panicked!  I thought for sure that if I looked again, “he” would be gone, proving that my imagination was definitely just on overdrive.  So, I poked my head up, looked again, and HE WAS STILL THERE!!!

“Okay, maybe it’s Dad,” albeit that would be pretty creepy, and my dad’s not really a creeper.  I focused my eyes more, and just stared.  He remained in his spot in my doorway and didn’t move.

“One…two…three!”  I jumped from my bed faster than I’ve ever moved in my life, and ran right through him to my sister’s room.  I jumped into bed with her, frantically trying to wake her up so I could tell her what had just happened.  Of course, I didn’t sleep a wink that night, but he didn’t return, so maybe I scared him, too!

My sister, surprisingly, didn’t think I was crazy.  She said that she had seen him and other strange things around the house, too.

Even now as adults, she and I occasionally recount the creepy things we saw when we lived in that house.  It still makes the hairs on our arms and necks stand up!

I haven’t seen any weird ghosts or spirits as an adult, so of course I’ve become skeptical, often forgetting about my own firsthand experience.  But then, every once in a while, my sister and I will start talking about it, and we remember that night so long ago that I swear I saw a ghost.  Thankfully it didn’t try to possess me or kill me or anything, but that doesn’t make it any less real [or scary]!

Do you believe in ghosts?  Have you ever seen one?  Share your stories! 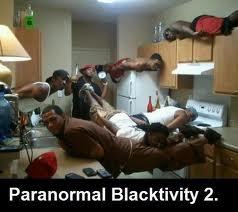