People say that statistics can be skewed in anyone’s favor.  Well not this time.  How are these statistics for you?

– There are currently over 27,000,000 slaves worldwide.  That’s MILLION!  This is more than at any other point in human history.

– One in 100,000 of European traffickers are ever convicted.

– Only one to two percent of victims are ever rescued.

– The average age of trafficking victims is 12 years old.  Twelve!  Some of us have daughters that age.

In case you haven’t been able to figure it out yet, I’m talking about human trafficking.  Human trafficking is a very real problem.  And not just in Eastern Europe and Africa, but here, in the United States, as well.

What is human trafficking?  It’s the illegal trade of human beings, usually for the purposes of commercial sex and forced labor.  It’s the world’s fastest growing criminal industry – even more so than drugs.  It generates $32 BILLION every year.

Every 30 seconds, another person becomes a victim of human trafficking and is forced into this modern slavery.

We’ve all seen the movie Taken.  The young girl was kidnapped and forced into the sex trade.  We think, “Oh, that’ll never happen to my daughter.  We live in the U.S., and people don’t just kidnap children here.”

1. Human trafficking happens right here, in your own backyard.

2. Only a small percentage of girls forced into the sex trade are actually kidnapped.

Did you know that most girls who end up being sex and labor slaves actually go with their trafficker willingly?

Yep, that’s right.  As terrifying as it sounds, many of these girls go willingly.  Of course, they have no idea at the time what’s really going to happen to them.  Some of them are so unhappy at home that they’ll believe anything if it means they’ll have a chance at freedom and a better life on their own.

They can’t escape.  They’ll be tracked down by their pimps and beaten.  Or forced into having more sex or performing more sexual acts.  Did you know that many of these girls are forced to meet quotas every day?  Quotas that no woman could possibly meet.  Yet they’re trapped.  They have no money, no resources, and no place to go.

Let’s talk a little more about them, so you that this may become more than just numbers to you.

Sex Trafficking: These girls are forced to perform sexual acts on and “service” an average of 30 customers per day.

Labor Trafficking: Victims are forced to work an average of 18 to 20 hours per day.

Organ Harvesting: These girls are purchased for kidneys, livers, eyes, skin, and blood.

Sadly, the United States is one of the largest buyers of these human slaves, and Americans account for a quarter of all child sex tourists in the world.

Let’s get a better idea of whom these slaves are: 80 percent of these human trafficking victims are female – 50 percent are children – 80 percent are under the age of 24.

There’s a very real chance that you’ve come into contact with one of these slaves and didn’t even realize it because, unfortunately, our awareness isn’t nearly where it should be regarding this issue.

Sex trafficking victims are often found in strip clubs, in internet pornography, at truck stops, in residential brothels (yes, these exist in the U.S., too), in escort services, and in massage parlors.

Did you know that in a decent amount of common nail salons right here in the United States, there’s a back room full of young girls performing sexual acts on men who come in the back door to pay for services?  These disgusting acts are happening right under our noses!

Labor trafficking victims are often found in agricultural industries, factories, restaurants and food service industries, in the hospitality industry, and in strip clubs.

Many of the men who pay for services from these slaves don’t even know, or are in denial, that these abuses are a major part of the sex trade.  The girls are scared to discuss their situations with these johns, and they certainly won’t ask for help.  The same premise goes for the labor trafficking.  These slaves are simply providing a service for which there is a demand.

As we’ve all heard, ignorance is bliss, and in this case, that certainly seems to hold true.

So now that you know about this rapidly-growing slavery, what can you do about it?

Unfortunately, right now, the main problem that exists in stopping this human trafficking is a lack of awareness.  Most people don’t even know it exists.  They don’t know that people get on the internet and browse thousands of ads for young girls and sexual acts.  They don’t know that the girl in the motel room next to theirs is not there willingly and is being forced to perform or is threatened with torture.

First and foremost, we need to be more aware of what’s going on around us.

We need to get the word out that this heinous issue does exist right here in America.

If you do happen to identify a case of human trafficking or know a victim of this crime, it’s imperative that you immediately seek help or send a tip to the National Human Trafficking Resource Center (Polaris Project) at 1-888-373-7888.  These girls are depending on us to help them.  We’re their only hope of getting out of this brutal cycle.

Here are some things to look out for and be aware of.  We need to be observant.

I know some of you may find it hard to believe that you would ever come into contact with a girl who is a victim of human trafficking or the sex slave, but it could happen.  How do I know?  Because I did.

Last summer, while in Myrtle Beach, my sister, mom, and I were out shopping.  We were leaving a popular shopping area, and there was a young girl beside the road in the parking lot, holding a sign that said, “Please Help. No Food for My Son.”  Immediately, I felt bad for this girl, but as I looked at her more closely, I could see in her face that she was terrified.  She kept looking up and across the highway at something.  I thought it odd, so I followed her line of sight across the street, and sure enough, there was a man staring at her the entire time.  Every time she would let her sign drop a little bit, she’d look over at him and immediately hold it back up so people could see it.  This poor girl looked scared to death.

The worst part is that she most likely didn’t need money to feed her son.  She needed money to give to her pimp.  And at night, that “help feed my son” sign probably turned to a prostitution sign.  This was right down the road in Myrtle Beach!  Myrtle Beach – where millions of unsupervised young girls come for Spring Break every year.  This wasn’t in Bulgaria or Greece, people.  This was here – at home.

We need to keep our eyes open, be aware, and write to our lawmakers.  I’m proud to say that South Carolina just passed a bill this year, helping to prosecute these pigs who traffic human beings.  If you have the time, you should read it – H. 3757.

Source: Not For Sale

Your role is critical in helping these children and girls.

Do NOT purchase or participate in the products and services that exploit human beings.

Hold your friends and family accountable for their actions.

Protect those that you love from exploitation and let them know about human trafficking. 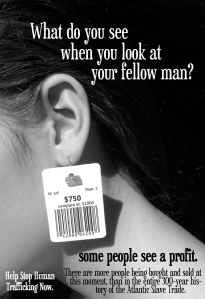